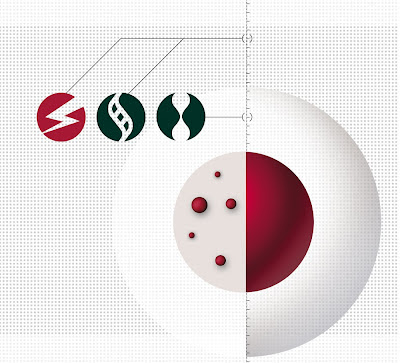 In response to DNA damage, cells must arrest the cell cycle and initiate damage repair to protect genomic integrity. Bassermann and colleagues unravel a new pathway in the G2 DNA damage response that is initiated by nuclear translocation of the Cdc14B phosphatase. This event results in the activation of the APC/CCdh1 ubiquitin ligase and the subsequent degradation of the promitotic kinase Plk1.
This illustration represents the translocation process of Cdc14B upon DNA damage in G2. The three small icons represent a symbol of DNA damage (left), the DNA double helix (center), and a symbol of movement (right). A timeline running down the center of the cover symbolizes chronology. The large circular figure in the center represents a cell with the two distinct states in which Cdc14B is found before (nucleoli) and after DNA damage (nucleoplasm).
Posted by blogmaster at 3:58 PM

The Pagano lab on MTV Italia